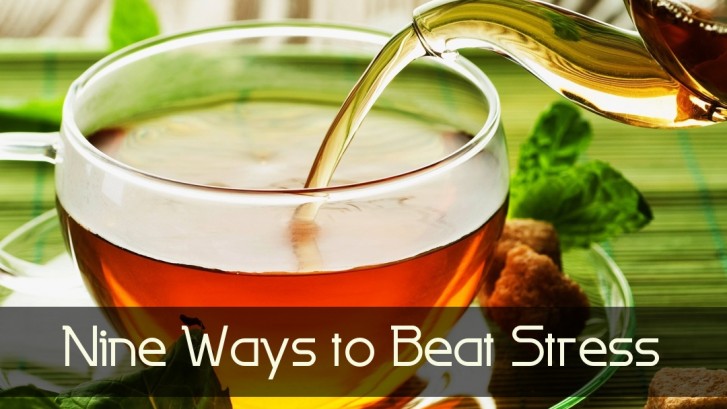 To beat your stress hormone you first have to understand it.  The stress hormone Cortisol is meant to help us.  It is produced by the Adrenal gland.  When we are overloaded with the many forms of stress from our modern world we can sometimes enter into the state of Cortisol Flooding which is a symptom of Adrenal Fatigue.

Cortisol helps regulate blood pressure and the immune system during a sudden crisis, whether a physical attack or an emotional setback. This helps you to tap into your energy reserves and increases your ability to fight off infection.

The trouble arises when relentless stress can keep this survival mechanism churning in high gear, ruining the hormone’s good intentions.

Constant high cortisol levels can cause:

“When cortisol spikes, it tells the brain to eat something with a lot of calories—a great survival tactic if you need energy to run away from a lion.  But not so great if you are stressed over a mother-in-law, paying bills, highway traffic or other modern issues.

To gain control over the Cortisol stress hormone our mind and body has a natural balance.

Beat your stress hormone with these 9 easy and natural ways

Music can have a calming effect on the brain, especially while you’re facing down a major stressor. When doctors at Japan’s Osaka Medical Center played tunes for a group of patients undergoing colonoscopies, the patients’ cortisol levels rose less than those of others who underwent the same procedure in a quiet room. Even if an invasive gastrointestinal exam isn’t in your immediate future, you can forestall cortisol spikes in other stressful situations—when hosting dinner for your in-laws, for instance—by queueing up background music. And to wind down faster at bedtime, listen to something soothing instead of watching TV.

Check out this 30 minute YouTube stress busting gentle music.  Dawn your headphones, close your eyes and for 30 minutes just breath slowly and deeply, focusing on your breath and feel warm energy flow in as your inhale and dark stress leave as you exhale.  You can even listen to this over your lunch break relaxing in your car.  Or laying in the grass at a nearby park. Take a nap if needed. Get at least 8 hours of sleep but some people need more to deal with stressful periods to cut cortisol.

What’s the difference between getting six hours of sleep instead of the suggested eight? “Fifty percent more cortisol in the bloodstream,” Talbott says. When a group of pilots slept six hours or less for seven nights while on duty, their cortisol levels increased significantly and stayed elevated for two days, found a study at Germany’s Institute for Aerospace Medicine. The recommended 8 hours of nightly shut-eye allows your body enough time to recover from the day’s stresses, Talbott says. When you fall short of the mark, take a nap the next day—Pennsylvania State University researchers found that a midday snooze cut cortisol levels in subjects who’d lost sleep the previous night.

The “cup that cheers” has deep associations with comfort and calm—just think of how the English revere their late-afternoon teatime. As it turns out, science confirms the connection. When volunteers at University College London were given a stressful task, the cortisol levels of those who were regular black-tea drinkers fell by 47% within an hour of completing the assignment, while others who drank fake tea experienced only a 27% drop. Study author Andrew Steptoe, PhD, suspects that naturally occurring chemicals such as polyphenols and flavonoids may be responsible for tea’s calming effects.

The pal who keeps you in stitches can do more than distract you from your problems—her very presence may help temper your hormonal stress response. Simply anticipating laughter is enough to reduce cortisol levels by nearly half, according to researchers at Loma Linda University. A little pampering can rub your stress levels the right way. After several weeks of massage therapy, subjects’ cortisol levels decreased by nearly one-third, on average, according to studies at the University of Miami School of Medicine and elsewhere. In addition to keeping cortisol under control, massage sessions reduce stress by promoting production of dopamine and serotonin, the same “feel good” hormones released when we socialize with pals or do something fun.

As reported Journal of Endocrinology, researchers led by Ladan Eshkevari, assistant program director of the nurse anesthesia program at Georgetown University School of Nursing and Health Studies found that stimulated the body via acupuncture has significant results in lowering the stress hormone.  Read about it in the New York Times online here.

Cut Cortisol 25% – Do Something Spiritual

Religious ritual fortifies many people against everyday pressures, and it can also lower cortisol secretion, report University of Mississippi researchers. Churchgoing study subjects had lower levels of the stress hormone, on average, than those who did not attend services at all. If organized religion isn’t of interest to you, try developing your spiritual side by taking a walk in nature’s “cathedral”—in the woods or along a beach—or volunteering for a charity.

People who practiced Buddhist meditation significantly decreased both cortisol and blood pressure in a 6-week Thai study. Similarly, participants who meditated daily for four months decreased the hormone by an average of 20% in a study at Maharishi University, while levels in the nonmeditating control group actually went up slightly.

Here’s a sample guided meditation.  It instructs to lie down, yet you can do any meditation in a comfortable chair.  It can even be done over your lunch hour in your car with the seat tilted back comfortably.

Next time you feel frazzled, try popping a stick of gum into your mouth to instantly defuse tension, suggest new findings from Northumbria University in the United Kingdom. While under moderate stress, gum chewers had salivary cortisol levels that were 12% lower than nonchewers and also reported greater alertness than their gum-deprived counterparts. One possible mechanism: In past experiments, chewing gum increased blood flow and neural activity in select brain regions.